I’m a huge Star Wars nerd, and I’m proud of that. I think I was in 2nd grade when A New Hope was released, and it absolutely captivated me. I have so much nostalgia for those movies, and I don’t care if other people think I’m weird for liking them so much. Yes, I have an R2-D2 USB charger in my car, and I nearly lost my mind the other day when my Waze navigation app asked if I would like to have C3PO’s voice deliver my driving instruction. Umm… YES!

Of course I have friends who don’t “get” my love of all things Star Wars. Most of them chuckle at my excitement… some of them politely rib me about it… some come right out and say, “I don’t understand how you can get so into these sci fi/fantasy movies.”

And that’s okay. I’m almost 47 years old, and I’m at that wonderful place in my life where I don’t always care so much about what other people think of me. It’s taken a long time to get to that place, even though I still struggle in some areas.

I started thinking this morning about how people sometimes make fun of others simply for the things they LIKE… or are really passionate about. A friend and I were chatting yesterday about how mainstream Comic Con has become. Conventions like that used to be fodder for a lot of jokes. People dressing up like the characters in comics, science fiction, or fantasy? What nerds, right? Now we know that cosplaying is an art form, and I’m increasingly in awe of the incredible attention to detail in so many of those costumes!

A couple weeks ago, a “news” channel, which shall remain unnamed (and not linked, because I don’t think they deserve more attention or traffic to their website), spent time making fun of people who like Star Wars. One of the commentators went on and on about how ridiculous these people are, and that she is too cool and “attractive” (yes, she actually used that term) to be into Star Wars. She presented herself as one of the Cool Kids, and liking something she thinks is stupid is unthinkable.

So, ridicule is important enough to air these days? (Again, I consider the source, but still…)

As always, my teacher hat pops on, and I think about the students in my classroom, in our school… and kids all around us. What does it say to THEM when they hear someone ridicule another person or group of people simply for what they LIKE?

When I was a shy, little girl, I was VERY aware of what the people around me thought. In 5th grade, I was really excited to wear my brand new Peanuts socks to school. Every character was on those socks, and I thought they were really cute. I wore a dress that day, and proudly pulled up those socks to my knees, so that you couldn’t miss seeing Charlie Brown and company.

When I got to school, some of my friends looked at my socks and then walked away. Later, I overheard them whispering to each other, “Can you believe she likes Peanuts?” “That’s so stupid.” “I hate Charlie Brown and Snoopy.” 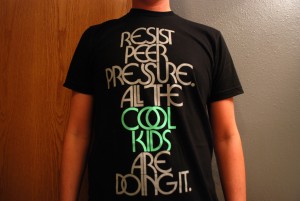 I was crushed. I kept trying to hide my legs under the table so no one would see them. I thought about taking them off and putting them in my backpack, but I lived in Omaha, Nebraska… and it was a chilly day. I excused myself to the restroom and tried turning them inside out, but you could still see exactly what they were. I stayed in the restroom and cried for a while, because I didn’t know what to do.

That was one example… but I know most of us have have multiple examples of situations like that. As I got older, I started hiding the things I REALLY liked from my friends. I was a closet nerd. Most of the kids in my class loved Star Wars, so I didn’t have to hide that. Luckily, it was cool to like Star Wars in the late 70s and early 80s. But my tastes in music, certain books, TV shows, toys I played with… much of that was hidden from the kids at school. I stopped sharing the things I was really passionate about and pretended to like the things that the other kids liked. Sad, but pretty typical, right?

When I became a music teacher, I often invited the kids to bring in music they wanted to share with their class. I didn’t realize that asking 7-12 grade kids to do this could open up a lot of pain for some kids. As they brought in their cassette tapes and CDs, I asked them to play a song for the class and then explain what they liked about the music, lyrics, etc. We had to go beyond just saying, “It’s cool,” to discussing the music a little more deeply. I asked the rest of the class to also ask questions or provide comments about the music…  Which instruments do you hear?What do you hear in the bass line? How does any of this make the song unique? etc.

A lot of the kids brought in heavy metal (to this day, I think I know all the lyrics to “Enter Sandman“ by heart.), rap, and a lot of country. Often, I would hear comments about how stupid someone was for liking a particular song… and that took me right back to the days of being ridiculed for liking something that others did not. I couldn’t let it go.

I asked the kids, “Do we all have to like the same things? Is one type of music better or cooler than another type? Or is it just different?” We started discussions that, at first, weren’t very productive. But as we started to analyze the music more deeply, the kids started to notice some common elements, patterns, and other factors that helped them move forward in their thinking. I kept reminding them how boring it would be if we all liked exactly the same things. Some of the kids started listening to music they would never have dreamed they’d like. For those kids whose tastes were completely different than their peers, I started to see some relief, and eventually, more confidence about those tastes.

Inevitably, the kids started asking me about my tastes in music… and other things as well. I shared the things I liked. When they laughed at some of the songs, movies, TV shows, and books I brought up, I stopped and just looked at them. And waited. And waited… until one of the students stood up for me. That was HUGE! By modeling for them that it was okay to like different things, and that it was actually cool to be an outlier with your tastes, some of them were able to step up and advocate for me, and eventually their peers. When kids begin to act as leaders in your school and start to show acceptance of diverse tastes, the rest of the kids take notice.

Fast-forward to the present in my teaching with 5, 6, and 7 year olds, I’m seeing the same things. They all tend to want conformity, and they’re sometimes afraid to share the things they really love that are different. We spend a LOT of time really working out those issues and sharing that we SHOULD all like different things. We are better together, because we have diverse tastes.

Now… back to the recent Star Wars ridicule. Or whatever it is that someone is really passionate about. If you’re an educator (or parent, or someone who has influence with children), how are you modeling acceptance? How are you showing children that we should celebrate our differences? That it’s okay to like something that isn’t mainstream or popular?

It’s difficult enough for kids, especially when peer pressure is so great an influence in their lives… if the adults are acting like Regina George from Mean Girls and dictating our tastes and opinions, how are the kids supposed to deal with that on their level?

One of the parents from my school told me earlier this year that she could hear “my voice” in her son’s conversations at home. At first, I was flattered… and then I started thinking even more about how great my influence is on these children… and what a heavy responsibility that is. If I were to make fun of a movie I didn’t like, for example, what would that do to a child in my class who liked that movie? What impression does that leave with that child?

I can’t just leave that in the classroom. I see it among the adults in my network, on Facebook (which is its own evil monster sometimes), and in conversations with acquaintances. Yes, snark is often funny, but I wonder how we could learn to appreciate our different tastes more… or maybe just let it go. If you don’t “get” why everyone is losing their minds over Star Wars right now (or whatever the new thing will be after the Star Wars mania dies down), that’s okay. Maybe just keep that to yourself. We won’t tell the other Cool Kids.

You don’t make your flame any greater by extinguishing that of another.