When I first started teaching over 20 years ago, I remember asking little kids questions like, “Who is a great singer?” Every single one of them raised their hands. For every grade level “older” I asked the same question, fewer and fewer kids raised their hands. The same pattern emerged if I asked them if they were good artists, good basketball players, good dancers, etc.

As we get older, we start to compare ourselves more with the people around us, and that’s a very human thing to do. Eventually, we start understanding what it means to be a good _______, because we have more experience from which to make those comparisons.

Sadly, the trend I’m seeing in the last decade or so is that I see fewer hands raised when I ask those questions of little kids now. When I returned to the elementary music classroom in 2009, I actually had kindergarten students tell me they were bad singers. WHAT!? How does a 5 year old kid think he’s a bad singer?

When I started at Anastasis in 2011, I remember an 8 year old who told me she couldn’t draw at all. When I asked her if there was something wrong with her hand that made it impossible to draw, she laughed a little but then remarked that she just wasn’t good at drawing. We talked about how we’re all still learning and that practice is important, but underneath it all, I wanted to cry listening to this child’s defeatist attitude at 8 years old.

Where is this coming from?

While I’d like to blame Malcolm Gladwell and his pseudoscientific (and factually incorrect) 10,000 hours claim, I can’t. It’s not Gladwell.

I stopped to think about the number of times I’ve apologized to my students or my own children before doing something that I wasn’t really great at doing. There are too many examples. 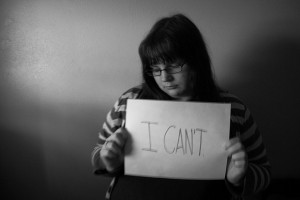 Whenever I’ve gone up to the chalkboard or whiteboard to draw a diagram or an image, I have apologized to my class before: “Sorry, I’m not a great artist, so this won’t be that good.”

I’ve just set them and myself up for judgment about what is good, and I’ve also given them an example of an adult who is so insecure about drawing that she has to apologize before she even starts.

Additionally, I’ve put a poor value on something that might be better than what my students might have drawn. If I say “this is bad,” then what does that mean to a kid who might not have drawn as well as I did?

“Wow, Mrs. B must think my drawings are REALLY bad then.”

And now I think about all the images and statements we unknowingly pass along to kids:

I’m sure there are many more we could add to this list.

I’ve had a lot of time to reflect about certain things in the last week, and I’ve come to some very sad conclusions:

I love to sing and I was a voice major. I love singing karaoke with my friends, because it’s fun… not because I want to show off. However, it’s also a comfort zone. I’m not afraid to get on a stage and sing, because I’ve been doing that almost my entire life.

It really bothers me when I hear people say that they can’t sing. Of course they CAN, they just don’t think they’re any good at it. So, I encourage them… karaoke isn’t about who is the best singer; it’s about having a good time and enjoying yourself.**

I’m such a hypocrite.

My husband wants us to play tennis. I really, really suck at tennis. REALLY. So, I’ve been balking at the idea. When I finally told him that I’m afraid to play because I don’t know how, he just said, “So what. Let’s just go have fun.”

Permission to not be an expert and to just have fun.

Hmmm… giving kids permission to try, not be perfect, and just have fun with it. I SAY that to kids all the time.

We all need to be better models for our kids, and DOING is more important then SAYING. We know that.

Time to walk the talk.

This doesn’t mean we should take away anything from people who are truly gifted in specific areas or erase competition from everything. Competition has its place, although I’ve written about its overemphasis, too. There is a need for expertise and talent to be recognized. However, there’s also a need for encouragement to SIMPLY TRY, and then practice to improve if it’s something you’re interested in improving.

I’d love to hear your thoughts in the comments section. I know I’m not alone in feeling this way.

**While I know karaoke might be a bad example (lots of “not great” singers get up to sing, usually after some form of liquid courage), singing is a great example. Singing is very personal, and I notice that, in the US especially, very few people in the crowd ever sing the national anthem at sporting events anymore. There’s always some professional at the microphone, and everyone else just listens. In Canada, I’ve noticed more people tend to sing along with their anthem. When I went to a Denver vs Australian Army rugby game a few summers ago, the Australians in the crowd were singing along, quite vigorously, with their anthem. So, is this just an American thing? Are we more insecure in the things we’re not great at than other nationalities? Maybe the Star-Spangled Banner is a bad example, because it truly is one of the most difficult songs to sing, but I still think there’s something about insecurity here that prevents people from singing.