Have you ever read If You Give A Mouse A Cookie?

Sometimes, that’s what learning is like in an inquiry-based school. And I LOVE it! Kids follow their curiosity into amazing areas of learning.

Today is April 1st. I really detest April Fool’s Day. (such a bah humbug!) I wonder if, in addition to the day after Halloween, this day ranks low on many teachers’ scales of great days. I was determined not to be a crankypants for my kids, though, who were waiting for me with huge grins on their faces. They were definitely up to something, and I had been warned they had a great prank all ready for me.

As I approached them to head upstairs, they all started staring at me, quickly raised their hands in the Hunger Games Katniss salute, and then they whistled/sang the four-note tune that was a signal between Katniss and Rue. It cracked me up. (Have I mentioned before how much I love these kids?)

After they all had a good laugh and we walked upstairs, we plopped ourselves into a room. They started chattering about good April Fool’s Day pranks, but then started discussing the difference between a harmless/fun prank and a mean-spirited prank. I loved hearing examples that they shared – some they had pulled on siblings, some that had been pulled on them. It was a fun discussion.

I asked them if they wanted to find out more, and they did. So then I asked, “where should we start?” They threw around words like history and origins. We had found our key search terms.

Within ten minutes, my students had found very few answers.  They were able to find some traditions that dated back to the 1500s with mentions of England, Scotland, and France, but no definitive origins. I showed a video that explained that no one really knows where April Fool’s actually started, but there are several theories. Within the theories presented, the kids recognized a few stories from their research this morning. Their favorite was the story of the rural French citizens who were never informed about the 16th century calendar change from Julian to Gregorian. They were ridiculed with fish slapped on their backs  et voilà! Poisson d’Avril!

If you give a kid a question, she will want to find some answers… but then will ask more questions.

After the laughter about a fish being slapped onto someone’s back, somebody asked, “What’s a Gregorian calendar?” My standard response in this case is, “I wonder how you could figure that out?”

[Me] “What do you notice about the eighth month?”

If your class of kids pranks you on April Fool’s Day, you can have meaningful discussions about word origins relating to an ancient calendar.

Hmmm… that sounds about right.

From our @TeamBaldwin tweets today (first tweet is at the bottom): 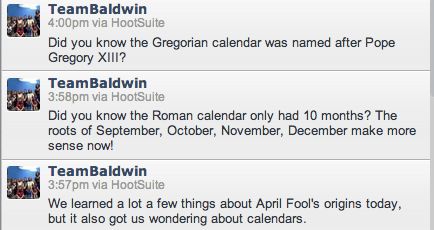 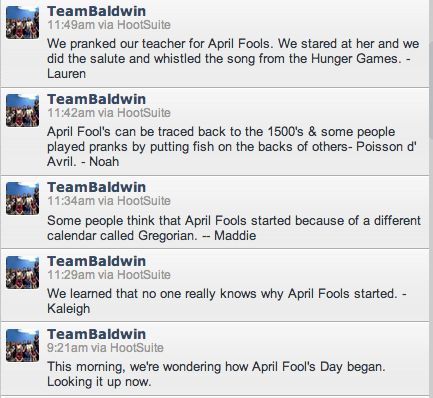