On Friday, October 4, our school participated in the Day of Play, inspired by the Caine’s Arcade and the Cardboard Challenge. This was our second year to participate, and the kids absolutely love it.

From one video in particular – Andrew’s Rube Goldberg Simple Machine – my kids heard some simple machines vocabulary. Some of the students had been exposed to this language before, and some had not. They started asking some really good questions about levers and inclined planes. I asked them if they thought it might be helpful to learn about simple machines before we started planning our own RGM. They agreed and starting researching different types. They broke into small groups, each taking a different component, and even built prototypes to share with the class.

After we shared our discoveries, I asked the kids to start designing a plan for our RGM. As is typical for my class right now, there were a lot of leaders, and not enough “listeners.” When it came time to actually have a plan, there were a lot of great ideas, but no plan. I agreed to act as facilitator, since we were limited by time- being ready for Friday’s Day of Play.

On Friday morning, we jumped into a learning lab room and used a whiteboard to sketch out our major plan. We had decided that 5 components in our machine would be a good limit, since we only had a few hours to build and test the machine. Additionally, we knew that we would connect ours to Miss Nancy’s class machine, and that her class had already planned for a ball to roll down an inclined plane to then initiate OUR machine.

The kids chose to stick mostly to inclined planes and levers for our RGM. This is the design we started with: 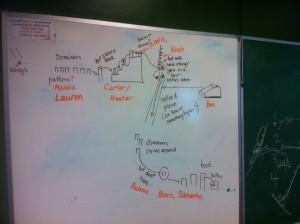 After spending most of the day building, we were able to get a few good tests in before we had to share with the whole school. A couple of components failed, but the connection to the other class’s machine did function properly, and the end of our machine worked exactly as we had planned! (The last part was a chain reaction of books – levers – falling onto a Hoops & Yoyo button that made a lot of noise.) 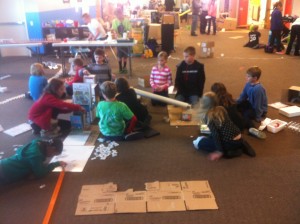 Some of my students were upset.

I asked them if they thought they could fix the components that failed if we would have had more time. They all agreed that they could easily fix those pieces.

“So, then did we really fail, or did we just run out of time?”

What a lesson that was in that short conversation! On Monday, they’ll write some reflections about what they learned last Friday, their favorite part of the activity, and how they feel they could improve the next time. We’ll probably write a class song about the machine we built. My kids think differently about their learning when they put it into verse, especially with a kickin’ beat in the background.

My favorite part of this entire activity? I didn’t plan A THING for those kids to learn. They did this all on their own. Everything I contributed was “just in time” learning.

Is learning about simple machines a standard in most science curricula? Absolutely. Did I plan for my kids to learn that? No. THEY were the ones who sought out that information through their own curiosity.

Now… let’s back up and pretend this entire activity never happened.

Let’s say I plan a lesson on simple machines. I deliver the vocabulary and explain to the kids how the machines work. I assign them an activity where they build prototypes, and MAYBE then I introduce the idea of RGMs and try to hook the kids.

It might still be a successful learning activity, but the difference here is that it is all teacher-driven.

When we depend upon standards to tell us what to teach kids, the kids don’t own the learning.

When we give kids the ownership of what to learn and let them run with it, we find that they naturally hit standards without us having to plan for it.

In this one activity, my students hit multiple standards, across multiple grade levels in science, math, language arts, and maybe a few I haven’t even noticed yet.

They measured. They drew blueprints. They collaborated with each other. They learned about trial and error. They wrote down what was working and what wasn’t working, then shared hypotheses with their group to plan for the next success.

Most of all, they had so much fun building and playing. Our school provided an opportunity for them to see each class’s RGM. They were so excited about this day!

Shouldn’t ALL kids have an opportunity to learn like this? Or are we content to sit back, deliver content, and ensure we’re hitting all the standards?

When we allow ourselves to be driven by standards someone else imposes upon us, and then TEST the kids on those very standards, we limit what our kids are able to do. I refuse to be bound by those constraints, and most especially refuse to limit my students’ curiosity.

6 thoughts on “My Issue With Standards”