In five days, I leave for San Diego to head to ISTE 2012. This is a special ISTE for me, because the first ISTE/NECC conference I attended was in 2006 in San Diego. I can’t wait to go back to this beautiful venue! 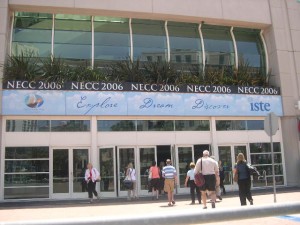 In 2006, I was working as a professional development coordinator for a suburban school district in Omaha, Nebraska. The only people I knew going to San Diego were other people from my school district. While on a layover in Denver, I met other Nebraskans going to the same conference. These are the people I spent time with at ISTE/NECC.

I didn’t meet anyone from any other states or countries, and there were no new connections made outside of my own state. I was okay with that at the time, because I’m a naturally shy person and don’t tend to put myself out there very easily. I didn’t know what I was missing!

The next ISTE/NECC conference was in Atlanta in 2007. Other than meeting a few new people through other Nebraskans I already knew, this conference was really a “repeat” for me in the networking area. No new contacts. No new relationships.

In 2008, I was on Twitter and I was blogging. In San Antonio, I ventured into an area called the Bloggers’ Cafe and worked up the courage to introduce myself to Darren Draper, Scott McLeod, and Lee Kolbert. They were bloggers I followed and admired. Some guy named Cory Plough introduced himself to me here also. These people were kind and welcoming… and I have to admit that San Antonio sticks out as one of the best conferences I had attended up to that point. That’s because I met new people and made new connections that I value to this day.

We often talk about how teaching can feel like an isolated profession. Social media tools can help to break that isolation… but if you don’t know how or where to make connections, the “tools” won’t help you. If you’re attending a conference, you need to take advantage of the face-to-face time.

My advice to those attending ISTE 2012 in San Diego:

1) If you are a conference regular:

2) If you are a new or new-ish conference attendee:

The people that I have met at conferences and then stayed connected with through Social Media are some of my most valued friends. I can’t wait to see them! But I also can’t wait to meet you… whoever you might be. I look forward to sharing ideas with you and hearing about what you’re doing for kids. See you soon!